Someone pointed out to me that a recently well-established Eltham business had been in the national newspapers this week. The Daily Mail story said: 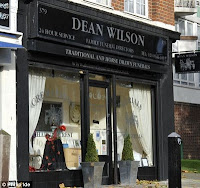 "A striking firefighter is running his own firm of undertakers which offers services including a ‘magnificent’ farewell firework display incorporating the deceased’s ashes.

He even produces films on how to organise the perfect funeral. His family-run firm, set up in 2004, provides traditional funeral services as well as such extras as a Scottish piper, a singer, a New Orleans-style jazz band and a string quartet.
Customers can also have ‘their loved one sent skywards as part of a magnificent final firework display’.
Last week The Mail on Sunday revealed that one in three of London’s 5,900 firefighters is holding down second and even third jobs."

It was a seemingly bizarre story - what was its point?  I pass this premises frequently - it is on the Well Hall Road (up the Shooters Hill end), close to the Eltham Cemetery and seems well-kept and well-run. Occasionally I've seen black coach and horses parked outside in full plumage.

But then the final line of the article gave it away. Aahh it was a 'anti-firefighter strike' story.   I have to agree with one of the comments on the online piece - no-one seems to complain when MPs hold down multiple jobs, while on a public salary, and at far greater rewards.
Posted by Raven Raven at 22:09

Emergency medical technician (EMT) software is designed to train EMT professionals. These professionals are trained to take care of emergency medical situations arising due to accidents, fires or any other incident at home or workplace causing injuries. These professionals are not exact paramedic even though their work is somehow similar to that of a paramedic Normally ambulances are staffed by at least one staff
with EMT 4 training accompanied by EMT 2 or EMT 3 training. The ambulance driver is also trained in basic EMT skills.
Fire Fighter