New Asian cool not so new 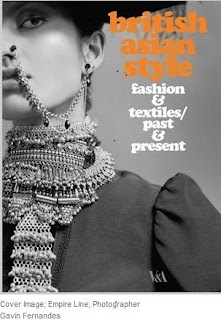 Just before ‘cool Britannia’ emerged in the early/mid-1990s onwards (Blur, Oasis, Geri in a Union flag dress), the ‘new Asian cool’ was also quietly taking off - Madonna in henna and bindis, Nitin Sawhney, and Goodness Gracious Me (just to condense a decade into a trite sentence!). Since then a host of British Asian cultural artists have become household names and the infamous claims about chicken tikka masala have become legendary.

Now, in a move surely designed to enrage the Daily Fail reader, a new book traces the long standing influence of South Asian textiles on British cultures of fashion, dress and design.
A collaboration between geographers at Royal Holloway, University of London and the V&A Museum has resulted in the launch of a new book ‘British Asian Style: Fashion and Textiles, Past and Present’ co-edited by Christopher Breward, Philip Crang and Rosemary Crill.

"The book is one of the public outputs of ‘Fashioning Diaspora Space’, a project funded by the Arts and Humanities Research Council as part of its Diasporas, Migration and Identities research programme....

This book is illustrated with an array of vivid images from the V&A's exceptional collections, alongside contemporary photographs from street fashion and the catwalk. South Asian textiles have shaped British fashion and dress for centuries, from the fashionable chintzes of the seventeenth and eighteenth centuries, through the silk and paisley Boteh patterns of the nineteenth century, to the orientalism of 1960s Bohemian fashion and the street styles of British Asian youth and designers today. British Asian Style looks at the on-going importance of South Asian textiles to British culture and fashion, as styles move into the mainstream....

British Asian Style shows how the South Asian presence in British culture has been apparent for centuries rather than being just a recent phenomenon...”

British Asian Style was published by V&A Publishing on 25 October 2010. I can't find much out there about this book yet so I don't think it's been picked up yet. The material is certainly fascinating - I must try to get a look at a copy (though I don't think Eltham Library will be stocking it any time soon...).
The AHRC's Diaspora research programme has funded some interesting projects, esp. around the 'British Asian' theme, which I hope to get time to blog about sometime. In the meantime, let me know if you get a look at this book and what you thought.