This year I have failed miserably to mark Diwali, which was yesterday. We were due to visit my mother's but plans changed and other life-things took over. Like going to work, like going to school, and being generally exhausted. So there were no diyas (candle things), no burfi (sweetmeats) and no lashings of yummy Indian food. Angela Merkel would approve. I don't live in an Indian community and nor is my husband Indian so it always takes a special effort to mark the day. (I must say it's been a particularly explosive week at work, and one well-covered in the media, but I decided long ago that professionally it was not a good idea to go anywhere near blogging about work, or even to 'come out' about my identity, and so, 'Raven' it is, for now...).

But back to Diwali. I regret not having made an effort for the sake of my kids who would have at least got to experience one special Indian day, amongst the host of other celebrations that they get to enjoy. Must 'try harder' next year... In the meantime I can only repeat below my Diwali post from last year. 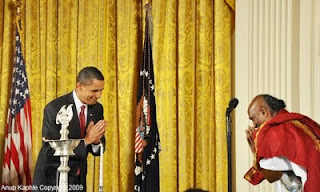 I kinda liked this photo which came across my radar - it's the big smile on the face of President Barack Obama, last Wednesday, lighting "the official White House "diya" to mark the celebration of Diwali, a Hindu festival that will be celebrated by Hindus, Jains and Sikhs around the world this weekend. A local Hindu priest from Maryland recited the mantra as Obama lighted the lamp." [credit: SAJAForum]

Anyways, we're West London bound to my mother's for the Diwali weekend. Not that I am of the religious variety, but the children enjoy it, just like Christmas, and I appreciate the beauty and history of it all. Hubby gets to eat lots of Indian sweets and gets fussed over. The kids, hubby and me get to light a candle at the local gurdhwara (sikh temple) and I might get to find out the answer to that eternal question that's always puzzled me - what's the explanation for the amazing co-incidence of Hindus and Sikhs celebrating Diwali on exactly the same day but for totally different reasons? Can anyone enlighten me? (I can't ask my mum because I don't know how to say 'co-incidence' in Punjabi..."

I came across a nice piece yesterday which explained why Sikhs (and Hindus) celebrate Diwali (though still not the co-incidence of them falling on the same day):


"In Sikhism, the festival commemorates the return of the 6th Sikh Guru Hargobind to the city of Amritsar after his imprisonment in Gwalior Fort by the Mughal emperor Jahangir, as the Golden Temple along with the whole city had been decorated with lamps to celebrate the Guru’s return. Sikhs also refer to Diwali as Bandi Chhor Diwas, meaning “Day of the Release of Prisoners”, as the Guru had arranged for 52 royal political prisoners to be simultaneously freed from the fort... North Indian Hindus in general celebrate Diwali primarily to mark the return of the Hindu deity Rama to the city of Ayodhya after his victory over Ravan, as described in the Ramayana. Many Hindus also celebrate the festival for a range of other reasons, including offering prayers to the Hindu goddess Lakshmi so that she blesses their families with prosperity during the following year. Public decorations of lights to mark the occasion are common worldwide wherever there are sizeable Hindu populations."

That post also included what I thought would be a too-religious-for-atheist-little-me video clip. But I played it and found it to be a haunting piece of music - it's Mitr Pyare Nu by Jagjit Singh (btw it features the 'golden temple" in Amritsar which I have visited a couple of times, a beautiful meditative place).

Happy Diwali and a Happy New Year!
Posted by Raven Raven at 18:36

An interesting set of dilemmas for the multi-cultural family.
How do you bring aspects of the culture to your children if you aren't immersed in it without making a monumental effort?
How, if you are an athiest or if your spiritual beliefs differ from that of your family/community do you celebrate without feeling like a hyprocrite but still give your offspring the choice of whether they follow the community beliefs or your own.
I was born Hindu but am in no way a practising one. I've celebrated Diwali for the family/food side of it. But I still try to read the story of Ram and Sita and explain to her about Lakshmi coming to give us luck to my tot. And that makes it easier than I think it is for Sikhs as there is no child-friendly story associated with the day - I mean who can beat a handsome prince, his loyal wife and best friend, a demon, a monkey king and a triumphant return to the kingdom. :)
It's also been made a lot easier by the media coverage of Diwali that concentrates on the Hindu aspects rather than the Sikh.
I'm still going to struggle at Xmas as I never celebrated before marriage, but my husband's family do, including religious aspects.
It's a learning process to find a path in this multikulti world we live in, to educate that world about what our cultures can bring to the melting pot, and luckily, if we don't get it right this time, there is always next year. You may even find as your boys get older, like Halloween they will be bugging you about celebrating Diwali.
So, don't beat yourself up...there is always next year.

I think you've hit the nail on the head here, on a number of fronts.

"How do you bring aspects of the culture to your children if you aren't immersed in it without making a monumental effort?" - that's the killer isn't it. There must be a book on it (if one ever had the time!)

Oh I thought you had two boys! Ah well. They look very cute in their Halloween get ups.
I grew up listening to Jagjit and Chitra Singh as my parents had a lot of their records...haven't got a clue what the words meant but the music always moved me.