Largest Sikh temple outside of India? 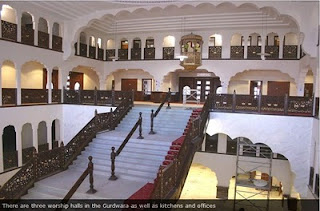 It was a co-incidence that for the last couple of days I have been in Chatham, North Kent, for a work event because down the road from there a remarkable building has been built.

Yesterday was the formal opening of the Guru Nanak Darbar Gurdwara, a Sikh place of worship. This incredible building, off Saddington Street in Gravesend, Kent, is believed to be one of the largest Gurdwaras in the UK and perhaps outside of India.

The remarkable aspect is that the cost so far of £12m or so has been entirely voluntarily contributed, and so has some of the labour to build it. The project started eight years ago. There are apparently about 12,000 Sikhs in Gravesend. I think the overall UK Sikh population is about 500,000 last time I checked. Some of the earliest Sikh settlers in the UK in fact lived in Gravesend although most attention is often focused on Southall in West London as being the heart and soul of southern England's Sikh community - there is a Channel 4 documentary about the Gravesend Sikhs which I must locate again (be grateful for any links...)

The new Gurdwara has been built on the site of the previous the Gurdwara which opened 41 years ago, in November 1969 - click here to see black and white photos of the opening event all those years ago (I always love to see early immigration photos, of whichever community - they encode so much about the time.) 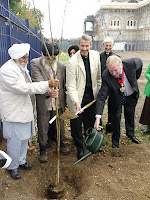 Sikhs are famously known to be a convivial people (though I guess I'm a bit biased!) and very welcoming of interfaith connections - for example, two years ago the the Deans of Rochester Cathedral and Canterbury Cathedral (photo left) visited the new gurdwara site to plant trees in the grounds.

Back to the future, the new building looks very impressive.  The President of the Gurdwara Management committee, Jaspal Singh Dhesi, has said that the building "gives Gravesend an international landmark that will be here to serve many generations.” As with most such places it welcomes school visit, contact them through their website.

The opening date for the new Gurdwara has been chosen as it coincides with
541st Birthday of Guru Nanak Sahib Ji, the founder of the Sikh faith - a service will be held at the Gurdwara on Sunday 21 November.

The BBC has lots of pictures of the new gurdwara here.
Posted by Raven Raven at 18:48