What intense and grim news recently. Corruption and cynicism riveted us for three weeks, then the shocking mass killings in Norway since Friday and then yesterday as if on cue, an outlet for people's pent up feelings and confusion, the sad and lonely death of singer Amy Winehouse for whom there is a Diana-like outpouring of public grief, despite few of those people knowing her.

People on social networking sites and the press have been ranking which merits greater grief, throwing in a further options of their own - soldiers in Afganistan and famine in Somalia. The psychological draw of concentrating attentions on one iconic figure, was encapsulated on Twitter - the #Amywinehouse hashtag immediately trending far above #oslo or #somalia. Many news channels were live-streaming yesterday from outside Amy Winehouse's house. I guess they wouldn't do that with Somalia - that doesn't offer known characters, or a neat narrative, and would contain many re-occurring tragic and disturbing events. 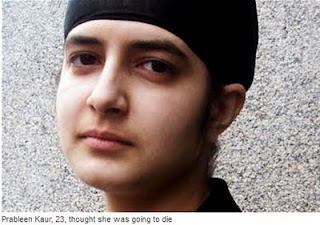 On the shootings at Utoya in Norway, I was moved to read some personal testimony published in The Telegraph, by one of the young people who describes her experiences as she managed to hide from the killer. It is the first detailed first-hand account I've come across. It happens that this woman is a Sikh Norwegian, Prableen Kaur:


"....We had a crisis meeting in the main building after the explosions in Oslo. After that there was a meeting for members of Akershus [a county bordering the capital] and Oslo. After the meetings there were many, many people around and inside the main building. We consoled ourselves that we were safe on an island. No one knew that hell would break out with us too.

I was standing in the main street [of the island] when panic broke out. I heard shots. I saw him shoot. Everyone started to run.
The first thought was: "Why are the police shooting us? What the hell? "I ran into a little room....."

Read the rest here.  Or Prableen's own blog, as translated by Google.
Posted by Raven Raven at 10:34

There has been very little good news for a while now.
We've had earthquakes, tsunamis, floods and volcanic eruptions.
As I child, I was assured that the end of the world was thousands of years away.
Now I'm not so sure!
I believe that there have been more out-pourings about Amy Winehouse than about Somalia or Norway because more people feel a connection with her whereas they might not feel any connection at all with events abroad.
She had an undoubted talent, sadly wasted.
She has gone but it's her family that have to pick up the pieces. After all, all any of us want is the health and happiness of our children. Sadly, both are beyond our reach.