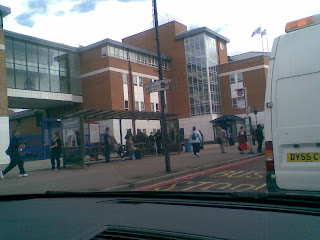 In a local link with the current events surrounding NOTW and hacking, it seems Andy Coulson (ex-editor of the NOTW) was taken to Lewisham Police Station earlier today. The station is apparently Europe's largest with 96 custody cells.

I drove by earlier, about 3pm and there were a few journo types and one TV van (photo left). People are saying there's quite a crowd outside now though. Locals on Twitter are referring hungry hacks to the Sausage Man stall by the clocktower...

It also turns out that Coulson's a south Londoner and was picked up from his home in Forest Hill according to The Telegraph, though elsewhere they are saying it's Dulwich.  Discussion going on over at Brockley Central.
Posted by Raven Raven at 17:42

Bet he wishes he could turn back time. from a great job in Gov to this.. I actually feel quite sorry for him

Well Dawna that's pretty empathetic of you. But he was in a high risk game, influencing other people's lives, allegedly. I'd like to know more first...