We dropped in on Lewisham People's Day yesterday. @cllr_mikeharris yesterday called it "the public sector Woodstock", which is some ways seems quite apt.

I think it's a great event, so much variety, and it means that hubby and I get to watch some live music for a change which we don't often get to do now amidst busy family life. Only problem is, as any parents knows, that we have to snatch those moments before the alert goes up -"I want an ice-cream/a drink/a fair ride/to go to the toilet"....I guess a 6 and 9 year old may not find an anarcho-jazz-punk band as fascinating as we might...

Anyways, here's some photos from yesterday:

Miss Kjah on the Dance for Life stage: Miss Kjah really hit the right note, with her RnB, dancehall, socca style. She's on Twitter  @misskjah and her website. 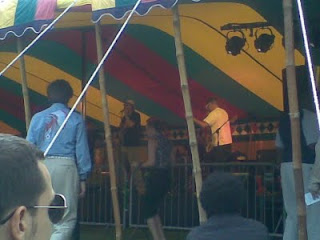 Stark Dangerous at the Rocklands stage 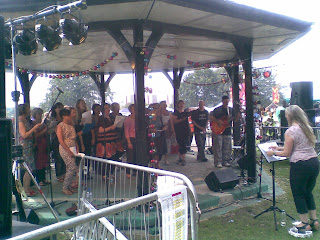 Felix's Rock Choir at the Bandstand: Fun choral singing of modern classics such as Ce-Lo Green and Dusty Springfield, at one of my favourite stages (and right next to the kids playground, which is always handy...) 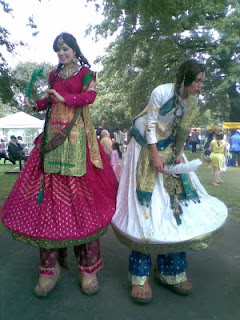 I didn't get a photo of the fascinating Ensemble Tramontana at the Blackheath Halls tent.  They were a four piece ensemble singing continental medieval troubadour songs - they were beautiful and haunting - no, really.  The singer gave very useful, and witty, translations of the lyrics before each piece.

It was while sitting on a hay bale here that we got talking to a fascinating elderly lady, with a Scottish accent, who readily introduced herself. She lived in sheltered housing, she said, but loved different music from around the world and made an effort to get to hear it whenever she could.  She then proceeded to name some Bollywood film stars from the black and white era, saying that she and her late-husband used to go to watch them decades ago. She even remembered some Hindi song lyrics. Wow. Talk about shattering stereotypes.

And finally, just love the graphics on this food stall: 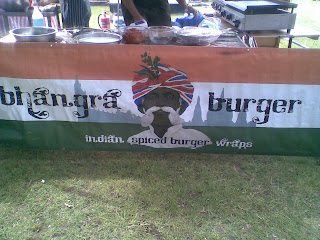 East London Lines were live-blogging the event and have more pics and description on their site. Those covering it on Twitter included the ever-informative and local, @MattClinch81.
Posted by Raven Raven at 12:15

London Masala And Chips, with nice publication, thank you for hitting the right note with Miss Kjah musical style.

Wishing you all the best.

Thank you SO much for such a lovely review of us! You can see more about us at
http://www.facebook.com/Ensemble.Tramontana