So following a hard-fought by-election in this very marginal ward, Charlie Davis has been elected the third Councillor in the Eltham North Ward to join existing Councillors Linda Bird (Labour) and Spencer Drury (Conservative). Congratulations.

Cllr Davis will have his hands full with the current list of issues being raised by Eltham residents.

We can all now get back to being aghast at the American election results or starting Christmas shopping...

My posts on the lead up to this by-election here:
"Let's make Westmount Rd great again" or the Eltham North by-election

*NEXT DAY UPDATE:
This post originally published at 11/11/16 12.45am had the first candidate winning by 56 votes.
I took the figures from the Royal Greenwich twitter feed (as did a number of media outlets I see). But different and, as it turned out, correct figures were posted later on the Council website – the Labour candidate had in fact won 1,297 votes therefore the difference between 1st and 2nd candidates was even closer at 38. So there you have it. Thanks to 'Anonymous' in the comments. 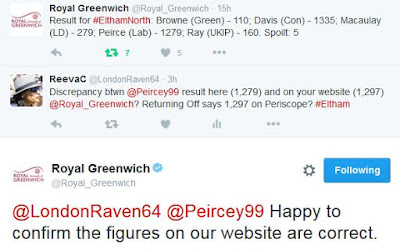 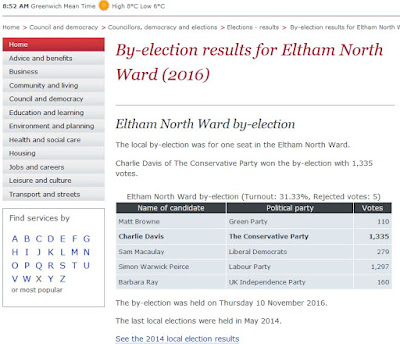 "..absolutely showed signs of comeback from 6th to 3rd in highly marginal seat without machine Con/Lab had 😃"

Thanks, worth pointing out.

True statistically, 3rd this time out of 5 parties/candidates (in 2014, 6th out of 6 parties fielding 10 candidates). Always a subjective element in interpreting the figures. 279 seemed low compared to others above and the total turnout number.

The Council website gives Labout 1297 votes which is what the Returning Officer read out (see Periscope). Possibly the Council tweet of 1279 is wrong?

Apart from this Greenwich Council did a good job of keeping people at home informed of what was going on at the count.

The rseult is not that different from the 2005 by election in the ward when Nigel Fletcher was narrowly first elected. However the Conservatives then had a much larger majority at the 2006 Council elections

Many thanks Anonymous.
That's very true - I did tweet 1,297 during the Periscope broadcast but then deleted it when I saw the Royal Greenwich tweet, not wanting to have wrong info out there!

I have asked RG which is correct! Let's see. (Macaulay's 279 may have caused some dyslexic confusion!)