Really looking forward to 'Bend It Like Beckham' director Gurinder Chadha's next film, Viceroy's House, due out next year. It certainly has a cracking cast in Hugh Bonneville, Gillian Anderson, Simon Callow, Om Puri and Huma Qureshi : 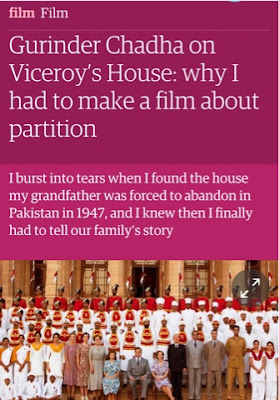 Gurinder Chadha's films are always a treat especially to second-gen onwards Brit-Asians such as myself though they certainly have a wider appeal.  I also happen to hail from the director's same West London suburb and from a Sikh-Punjabi background so her material particularly resonates with me and it's always interesting to see what she's homing in on. Every Punjabi family has a partition story - I'm curious to see how she handles hers and how she mediates it within the grammar of film-making and the demands of commercial cinema.

In a more recent interview from this month, this time an event at America's Clark University, we learn that:

“Viceroy’s House” tells Chadha’s family history. “When I was growing up I had come to understand that partition happened because it was our fault — that we Hindus, Sikhs, and Muslims couldn’t get on with each other,” Chadha recalled. “There was violence and the British had no option but to divide the country. … As a result I had somehow felt that the loss of a homeland was a result of my ancestors’ fault.” Chadha said that when archived historical documents eventually became public, she and her family learned the partition was a political act."

Read more from this event here.
Posted by Raven Raven at 11:01