Eltham Lights Up 2016 and celebrates Roald Dahl this time

Central London may have had its switching on of the Christmas lights last Thursday but for many families and residents in a certain south-east London suburb, the annual Eltham Lights Up event was the place to be.

Organised by Royal Greenwich Borough, this much loved Lantern Parade in Eltham High Street and the switching on of its own Christmas lights is well attended by locals. In the weeks leading up to it, local primary school children make illuminated lanterns which are proudly paraded behind their school banner. The event was also part of the Eltham Arts Winter Festival 2016 which ran from 29 October to 20 November and showcased over 150 arts events in Eltham this year. In fact, Eltham Arts's own Festival Finale takes place today, 20 Nov, at the White Hart.

This year's Lights Up theme was Roald Dahl on the occasion of what would have been his 100th birthday. Emergency Exit Arts, an arts organisation based in nearby Greenwich, which specialises in using visual performance, processions, puppetry and pyrotechnics, brought alive characters from Dahl's enduring children's books. They joined lots of gleeful lantern-toting children (and parents!) to celebrate this annual festive occasion now in its 17th year.

Here's my short film of this year's Eltham Lights Up thrown together from my footage: 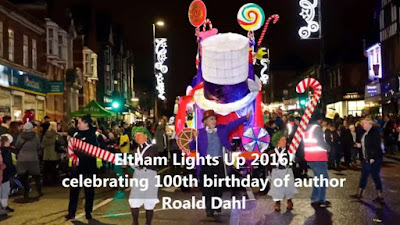 I remember first attending this event when our two children were pre-school aged and were beside themselves with excitement waving glow sticks, watching the colourful parade and then the finale fireworks from the top of the M&S building. In subsequent years they've paraded with the Gordon Primary School, arriving early to assemble in what was then the playground of the nearby Church of England School in Roper Street, now the subject of scaffolding and the erection of a new building on this historic site just behind the High Street.

Now young teens, our children are naturally more concerned to 'hang out' with their friends wandering around trying to buy the best hot chocolate, leaving me to enjoy the parade from a different perspective.

Despite concerns about the effect on this event of the current improvements being made to Eltham High Street, the Council rushed to have it ready to host the Lights Up event and luckily succeeded. However, after some previous cases of hot falling debris, the fireworks have for the last couple of years been replaced by other finales, this year some fiery shooting musical flames. There was also musical entertainment laid on across three stages - on Passey Place, next to St Mary's and in the Eltham Leisure Centre - this years' acts included the Pytchwood folk duo, the band Little Beach, the teen boy band Decks and Quatrz, the Eltham hill School Choir and the Rock Choir. Welcome though this was, it made it difficult to get round and see them all!

People persevered through the early heavy rain and were rewarded with dry, crisp weather in time for the switching on and the parade itself. And so another Eltham Lights Up comes to an end marking the start of Christmas.

Other local lighting up events include: