Good luck to the March for the Alternative tomorrow

Good luck to those marching tomorrow on the TUC's March for the Alternative.

In a nutshell (I don't have time for more...) I totally agree, too much too soon, there are other ways without decimating such public services. Have a look here at the Guardian's ongoing round-up of public sector cuts or click for NHS cuts, Children's services cuts, Housing and regeneration cuts, Local government , cuts, Social care cuts, Voluntary sector cuts. 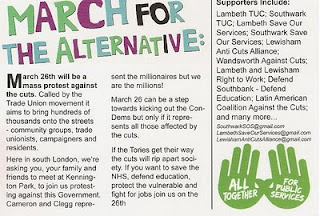 From my own experience I know that, despite the best efforts of staff involved, higher education is never going to be the same again.

There are details on the Transpontine blog about how to join the marches from the SE London area.

And if you can't join:

March 26th is expected to be the largest civil society demonstration in almost ten years. However we realise that it’s not practical or feasible for everyone join in the march.
Whether you're attending the march or not you can help create an online protest that matches that on the street. Here's how...". Read more at False Economy.

I've signed up with a 'twibbon' which explains the strange footprints on my head, on my Twitter image...
Posted by Raven Raven at 22:23

Isn't it odd that the economy forces the government to make swingeing cuts on the NHS and education but that they can still afford bombs for Libya?
And I expect we'll be handing over £3 billion to Portugal too shortly.

It was certainly strange how Cameron found a sudden democratic zeal for this one country...