I feel all BNP-ed out after last week and have had to turn attentions to half-term week with the children. It's a shame the current lovely warm weather could not have been predicted - we had a lovely October half-term week in Hampshire a couple of years 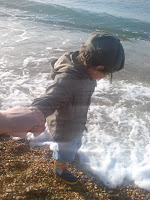 ago. Having set off on a Friday evening, we stayed a couple of days at the Shorefield Country Park, just ten minutes walk from the Christchurch south coast with its pebbly beach with its colourful rows of beach huts (our photo above). We had lovely woodland and beach walks, swimming, eating and relaxing. Then the car was packed up again and we moved camp, driving through the New Forest a few miles inland just outside Winchester, and stayed at the slightly quirky Marwell Hotel - you're supposed to feel like you're on safari and in an animal-infested jungle - to convince you it 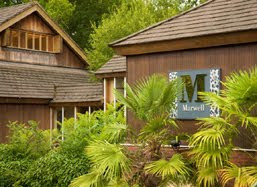 comes complete with piped animal noises in the corridors! And, you know, it kinda worked, the children loved it. From there you can, of course, cross the grounds on foot and visit the vast Marwell Zoological Park, the raison d'etre of the hotel (though all mention of the word 'zoo' seems to have been purged from their website) - don't forget to get your discounted zoo tickets from the hotel reception. The next day on the way back home we had a sunny but cold day at Paulton's Park. It took a lot to amuse our then-3 and 5 years olds! I'm not sure why I went into this old story - just feeling nostalgic about this week I guess, and the places we've been with the children who are growing up fast.

[Warning: possible spoiler alert coming UP - thanks to Plummy Mummy for pointing that out]
This week has been more local. I took the children to the Greenwich Odeon to see Disney Pixar's Up today. A strange but intruiging film - "by tying thousands of balloon to his home, 78-year-old Carl Fredricksen sets out to fulfill his lifelong dream to see the wilds of South America. Right after lifting off, however, he learns he isn't alone on his journey, since Russell, a wilderness explorer 70 years his junior, has inadvertently become a stowaway on the trip." It was the usual animation triumph for Pixar though quite dark in places - the death and miscarriage in the first 15 minutes had my eyes stinging, I have to say. However there's enough else to amuse the kids and they seemed to enjoy it. We braved the tiny Nando's afterwards which was busy busy, busy. There were tears there from my little boy though who, having piled up his bowl, couldn't then (in a 'heaven turned to hell' moment) get the frozen yoghurt dispensing machine to stop! All was well in the end.

Anyways, back to the old school and work routine next week, though before then we have the Halloween circus to brave...
Posted by Raven Raven at 23:54

ARGH....have a spoiler alert next time as I have seen UP!

Only kidding. I have the memory of a goldfish and would forget. The holiday details sound lovely.

Crikey, didn't think of that here. I've corrected it now - thanks.

It was a lovely holiday. Made even better by having got a 'special late deal' at Shorefield. Admittedly, the 'chalet' was more a 'bungalow in a garden shed' but not bad for £125 for three nights. Still, we had the relative luxury of the Marwell Hotel to go on to. Roll on the next holiday.