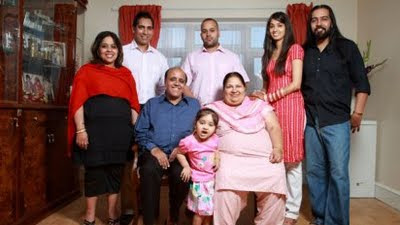 This TV series is going to be a 'must-see' for every Asian household in the country.
"Following the success of the Bafta nominated The Family in 2008, the Grewal family from Windsor will be the subject of this major observational documentary series for Channel 4. This year there are nine family members - one of whom is born during the series - and three generations all living under one roof."

It starts on 4 November at 9pm on Channel 4 and, if the previews are anything to go by, it's going to be hilarious. It's got the full stock of characters that any British-Asian will recognise. But more than that, and most poignantly as a comment on an 'immigrant family', it has characters that ANY community would recognise - guess what, underneath the different style of clothes, food and language, famillies are pretty much the same.

I'm curious about the editing and the narrative which the editors will choose to pursue - the preview seems to be playing it for laughs but I'm guessing they'll be some bitter-sweet moments too in the mix.

I'm very curious about the language use which will be portrayed - were the participants advised to use English more than Punjabi? Did the editors favour cutting in the English bits more than Punjabi? How much Punjabi will there be and will it be subtitled? As someone who's primary research interest is 'code-switching' (or a more academic reference), I'm also looking forward to seeing some good examples of the languages being mixed together in the conversations of speakers (what great linguistic data, verbal and visual, the whole unedited footage would be - that's the stuff of fantasy, well, mine anyway....)


The doc has been picked up all over the media - even The Sun seems chuffed about it.

And finally, prompted presumably by this series, there is to be a related event at the Royal Society of Art (RSA) in London:

The BAFTA nominated series ‘The Family’ returns this year with the Grewal family from Windsor. Filmed over a period of 8 weeks, with 28 cameras following them round the clock, this unique observational series documents the universal themes of family life.

Join us for a special preview screening of an episode of ‘The Family’ and the chance to see shorts by Asian filmmakers.

A Q&A will follow, discussing the representation of British South Asians in the media, chaired by Channel 4 Head of Diversity, Oona King, commissioning editor, Aysha Rafaele and filmmakers Sadia & Shazia Ur-Rehma. In association with Channel 4 and Bombay Mix.