The strange case of the 'Schotten Preise' 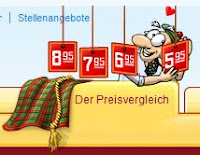 I heard about this extraordinary story - the Germans have for centuries been using a racial stereotype about the Scottish to refer to something that's cheap in price. This has persisted so deep that German outlets even have a stock phrase 'Schotten preise' ('Scottish price') which is routinely used to refer to products going cheap.

The price comparison site Geizkragen, for example, uses this 'happy cartoon Jock' complete with tartan hat and kilt combo advising Germans how to save money.  The Telegraph reports that:

"The Scottish National Party is to lodge an official complaint with Germany’s advertising association, arguing the long-established marketing technique is offensive.

Angus Robertson MP, the party’s Westminster leader, said the phrase promotes an unfair racial stereotype that Scots are mean and advertisers would not dare make the same association with orthodox Jews.
Mr Robertson, the son of a German, said it was unacceptable to portray Scots in such a pejorative way. “It doesn’t have to be this way,” he argued.

“You wouldn’t do it with orthodox Jews, so why do it with Scots? The constant association of our country and people with meanness and cheapness is beginning to hit at the borders of defamation and insult.”

Why have the Germans picked on the Scots particularly?  We're told that "“Schotten Preise” may derive from the 15th century when many Scots lived in German-populated areas of the Baltic and are believed to have offered goods at competitive prices." So ingrained is this phrase that a friend of mine (English) studying German even found it listed at the back of her German dictionary as one of the 'common phrases' to learn!

However, right on cue, it is not long before those objecting to racial stereotypes are accused of being 'politically correct'. "Alex Johnstone, a Conservative MSP, accused Mr Robertson of indulging in “a kind of political correctness we could well do without”, saying he should act “in a more light-hearted and engaged way".  Yes, everyone should be happy to be called a p*** or else you're just being, well, miserable. I'm sure there's a place for jokey banter (ask any Asian who has to smile at curry jokes) but such stereotypes should not be used in public material, however much it persists in folklore.

I hope the SNP gets somewhere with its complaint. Still, I have to admit that it's a relief to be a bystander for a change in the more usual 'racial slur' rows.
Posted by Raven Raven at 23:48