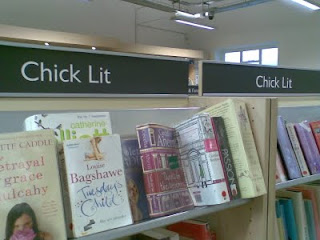 I was astonished to find in my local library row upon row of shelving boldly titled 'Chick Lit'. Chick Lit? Yes, I know what it is, but I didn't realise that the term was now a formal category adopted by learned houses of book-lending. So astonished was I that I snapped this photo in the library, which is in the London Borough of Greenwich.

I am more used to seeing the chick lit label on the backs of books or in Sunday supplement reviews, often in the same sentence as mentioning the Bridget Jones books rather than in library settings. I would be surprised to find a 'chick lit' section in our university library (I must ask our university Librarian her views on this...).

One source describes this 'genre' as "genre fiction within women's fiction which addresses issues of modern women often humorously and lightheartedly.The genre sells well, with chick lit titles topping bestseller lists and the creation of imprints devoted entirely to chick lit. It generally deals with issues of modern women humorously and lightheartedly. Although sometimes it includes romantic elements, women's fiction (including chick lit) is generally not considered a direct subcategory of the romance novel genre, because in Chick lit the heroine's relationship with her family or friends may be just as important as her romantic relationships."

Other sources too see 'chick lit' as linked to feminist themes and protangonists. So here the use of 'chick' is an appropriation of a previously dismissive/pejorative word used for women, much in the same way that the n-word (for 'black' people), or 'queer' (in 'gay' circles) are sometimes used. 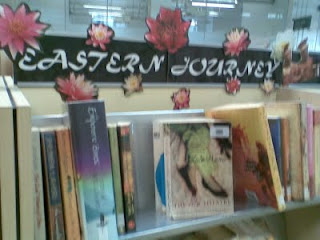 It made me think about fashions in genre-naming. When will those other contenders - eg. 'mommy lit', 'curry lit', 'lad lit' etc. - see their name up in lights?  The reality is, of course, that local libraries, keen to hang on to Council budgets, are merely trying to cater for their audience (alongside now providing IT facilities) - I guess that 'chick lit' is a large category and does what it says on the tin, in a more exciting way than 'Fiction A-Z', as the other fiction shelves are named.  Though quite where they'd shelve Jane Austen, I don't know...

While I'm writing about library shelving categories (did I really just write that? That is worrying, I've got to get out more...), I had to chuckle when I saw an 'Eastern Journey' shelf (one-sixth of the space of 'chick lit', I might add, covering the whole planet east of Turkey!) complete with lotus flower decorations!  Come on Library, that is a bit 'eighties don't you think?
Posted by Raven Raven at 23:14