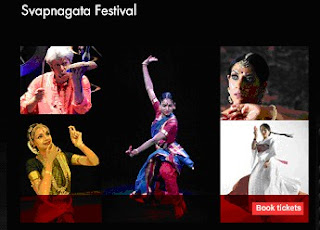 For fans of Indian and British Asian music, dance and choreography there's a great festival coming up. Svapnagata at Sadler's Wells (in Islington, London) will be featuring over 60 such artists in a festival from 16 to 28 November 2009.
Svapnagata, which means 'dreaming' in Sanskrit, is curated by multi-award winning composer Nitin Sawhney and dancer/choreographer Akram Khan. The festival will include a whole range of Indian musical experience from classical dance to British-Asian hip hop. Other notable names include Anoushka Shankar, Trilok Gurtu and Jan Gabarek. See the Sadler's site for the programme.

I've seen both Akram Khan and Nitin Sawhney performing on different occassions (and, in an earlier life, have interviewed Sawhney). They are two very focussed and grounded individuals who are hugely talented. They not only reflect their respective disciplines of dance and music but they subvert, mix and fuse their art coming up with unique material which stretches boundaries - to carry on the cliches, they are cutting-edge (click on the pic, below, to hear them talking about the Festival - or see this interview with the BBC). 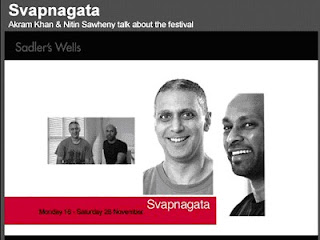 I saw Akram Khan perform last year in Sacred Monsters also at Sadler's, with Sylvie Guillem, and it was spellbinding - the closest it's possible to come to tears by watching dance.

So you might want to check this out. And for 'south-east London' readers, you might be interested to know that Khan and Sawhney are both South London boys...
Posted by Raven Raven at 23:12

ooooh I like your new header. Very pretty.
I am a fan of Nitin S so will try to catch one of these shows. Thanks for the info

Aw thanks, I've been working on this new layout for a while.

Let me know what you thought about any of the Festival shows, if you get along there.

[for now, back to 'London Namastey' the film I'm watching...I fear it has no hopes of getting any better - the heroine (shameless Western hussey) will of course start to fall in love with the bloke (salt of the earth Punjabi) her dad has virtually 'force married' her to].