Thamesmead...as shorthand for the ills of modern society? 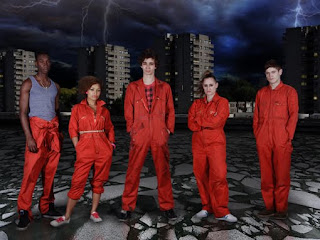 A south-east London town is the setting for a new E4 drama series, 'Misfits', which started on 12 November (Thursdays at 10pm).

Thamesmead has again been chosen, it would seem, to lend its "concrete brutalism" to provide the backdrop for this drama about a group of young people on community service who develop superpowers (sounds intruiging...).  The Independent sympathises with weary Thamesmead residents who "could be forgiven for emitting a low groan at seeing their neighbourhood once again used as shorthand for the ills of modern society".

My own associations with Thamesmead are rather different and twofold - pain and happy shrieks. For we only ever trek out to that land of endless roundabouts and dual carriageways to visit the huge dental practice for...ahem..more challenging dental work, or to Tiger Cubs, the kids play place for birthday parties, set in one of those huge shopping estates which surround a car park.

But I digress. Thamesmead is not alone, of course, as a south-east London film location - Greenwich, Bermondsey, Elephant and Castle etc. have all been much used. Thamesmead itself was the setting for Stanley Kubrick's 1971 movie 'A Clockwork Orange '. The famous orange boilersuits of Clockwork appear in Misfits too in a seeming homage. Some other south London locations used in filming are discussed at Transpontine - amongst them, I really like this one: did you know that Reese Witherspoon’s ‘Harvard’ speech in Legally Blonde was actually filmed in the Great Hall of Dulwich College!
Posted by Raven Raven at 17:14