If you ever go to Dundee (Scotland) don't be surprised to find a pensioner speaking in Hindi to you...


Do you know about the intruiging, close connection between Dundee (Scotland) and Kolkata (India, then Calcutta) which ran over several generations? No? Nor did I until I watched a fascinating documentary last Sunday on BBC2, narrated by the actor Brian Cox who himself hails from Dundee.

During the 19th century the population of Dundee swelled with migrating workers who came to work in the jute mills using this raw vegetable fibre imported from Kolkata. However, there was a steady decline in the Scottish jute mill industry from the 1870s onwards, causing many Scottish workers actually to migrate from the east coast of Scotland to the South of Asia.  A bit of a reversal of today's trend...

After India's independence in 1947, the indianisation of industry meant that the Dundonians had to learn to work alongside, rather than over, the Indians. 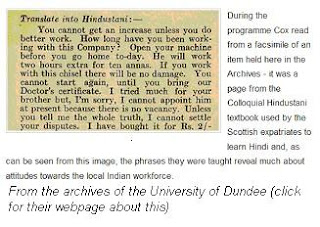 The documentary gives many insights about the relationship between Dundonians and Kolkatans at each stage of their see-saw relationship. In India, we see how the Scots tried to learn Hindi in order to communicate with their workforce, the party lifestyle of some of the Scots, and some of the terrible conditions in which the jute workers worked. Back in modern day Scotland, we see interviews with some of the now-aged Scottish returners, including their get-togethers in a self-formed 'Calcutta Club' where they still chat in Hindi to each other. Hindustani jute workers manual, courtesy of Dundee University.


It's a first-person narration by a wistful Brian Cox, whose mother was a jute spinner and father a sacker and sorter. He is appalled by the conditions and refers to the 'jute barons' who, "to ease their consciouses', built their public buildings in Dundee and in Kolkata still standing today. He notes that Kolkata of course has the world's longest-running democratically elected Communist government, about 32 years I think.

The programme can be seen on BBC's iplayer for another two days or so, or download it now to watch it later.

Hey thanks for the headsup on this. My husband is from Dundee so I'm sure he will be interested.
I wonder how many Europeans speak Hindi...my mum used to work for a Jewish bakery and used to meet quite a load of old jewish folk who spoke hindi. Always made her feel good.

I'd be interested to know what your hubby thinks about the representation of Dundee in the doc and whether he'd heard the saying that Dundee is the city of of "jam, jute and journalism".

On Europeans speaking Hindi, that would be an interesting question. Since my Masters was in Sociolinguistics I may have the answer somewhere on my bookshelves - but I guess someone would need to have surveyed that question. I wonder if your mum's Jewish bakers had links to Cochin, the city in Kerala where there had been a Jewish community for hundreds of years, though now much dwindled...

Dear Raven,
hi there...I am Komal,doing a project on Scottish Cemetery in Calcutta(Kolkata). seen your blog. i need more information about the Scottish settlersin Calcutta and what happened to them,why thy left and all.if you have any information can you share with me??? I will be really grateful to you. my email id is:- komal4u@gmail.com.

Hi Komal
Thanks for dropping by. I'm afraid that I am merely an interested amateur and haven't got any further information. The documentary seemed to cover some of those aspects, as I recall, and might be useful. The University of Dundee might be able to help? Good luck.

i have gone through this blog. i found it very interesting and helpful. nowadays i am working from my home and this blog really doing great for me.