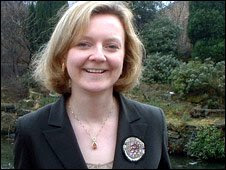 A meeting tonight in Norfolk could decide whether we are in for a by-election in the Eltham South ward in Greenwich Council (*see below).

At that meeting Elizabeth Truss, the newly-selected Tory parliamentary candidate for South West Norfolk is attempting to avoid de-selection tonight, after the row erupted about the Norfolk party members not having known about Truss' 18-month affair in the past with an MP (all has long since been been forgiven and forgotten by her husband). Now that has come to light, they are meeting to decide how relevant it is that their candidate had an affair and also that she apparently did not flag this up to them. Many feel, though, that this row is more about the way in which the central party has imposed its candidate on a local constituency. There's been a 'blogging blizzard' with much talk about 'Cameron cuties', the 'Turnip Taliban' and, no less, 'a fight for the very soul of the Tory Party'.

Ms Truss is at present one of the three Conservative Councillors for Eltham South. This is how she won in 2006:


Elizabeth Truss's local and activist record has been much defended by local Tory councillors (well, they would wouldn't they?). The meeting begins at 7pm tonight. It will be interesting to see what happens. My guess? Under pressure from the Tory machine bent on national election success, I think she'll stay selected in Norfolk.
[Update 22.30hrs: About 200 members of the South West Norfolk Conservative group voted 132 to 37 to back Elizabeth Truss as their candidate at the next General Election.]

*well, possibly, depending on when the general election is called for ...
Posted by Raven Raven at 16:48