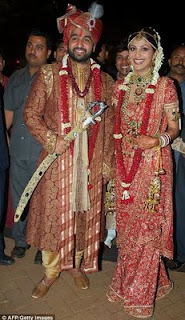 I don't generally go in for commenting on 'Bollywood' celebrity news. But I have to admit to being curious about the news that Shilpa Shetty got married yesterday.

Most UK readers will know Shilpa as being a Celebrity Big Brother 'housemate' in the controversial 2007 TV series which resulted in the bullying episodes with the late Jade Goody et.al.

In a lavish Hindu ceremony in Khandala, a hill resort near Mumbai, Shilpa married Raj Kundra, a London-based businessman.

You can find all the salacious details about the wedding all over the web. But I was struck by this photograph - they've gone for full traditional gear and look just like an archetypal Indian bride and groom (he even arrived in a carriage drawn by white horses!).  She looks pretty happy and you've got to wish them luck (though whether his ex-wife will be doing the same, is another matter...).
Posted by Raven Raven at 23:09

She was on sunday morning bbc2 show a few months back talking about the new venture her and hubby are going to launch on hapless UK bods...a range of
foods. Wonder if they will be as
traditional ;)