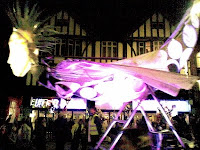 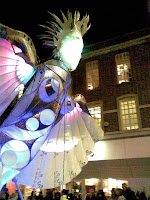 It's not everyday that you see such a sight in a south-east London suburban high street - a giant lit-up ghostly figure processing down the middle of the road.

The occasion was the switching on of the Christmas lights in and around Eltham High Street (SE9, London). The 10th annual Eltham Lights Up ceremony on Thursday 19 November featured a lantern parade and performances by local primary schools, aswell as the cast of the Bob Hope Theatre’s Wizard of Oz pantomime.

So far, so very local, so what? Well, it was a marvellous example of an event which involved many sections of the community and which loads of people turned out to join in and to watch. (It's also a gratuitous opportunity to show off the photos I took...). The children were beside themselves waving their glowsticks around and jigging to various musical floats.

After the energetic parade there was an impressive fireworks display off the roof of the Marks & Spencer building - everyone oohed and aahed in all the right places.

Even the local MP, Clive Efford (photo below right), turned up and said a few words on the stage erected next to the St Marys Community Centre - a stage which had been earlier populated with glittery jazz-playing santas (I didn't say it was tasteful, it was fun...) - actually they were really quite good.  So well done Eltham. 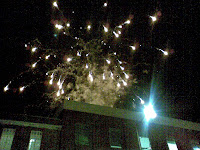 Nice photos. Gutted we missed it but I was "trapped" at my bro's house looking after his kids as he wife tried to deliver yet another sprog.

Thanks. Hope all went well with the delivery. ('yet another' sounds like there quite a few...)