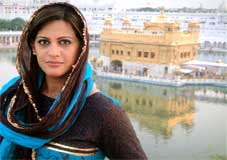 If you want to know more about Sikhs and what significant event happened for them in 1984, you might be interested in this documentary on Sunday on BBC1. The hour-long documentary apparently stirs up some controversy because of its portrayal of militant Sikh preacher Sant Jarnail Singh Bhindranwale. But it all centres around the personal journey of long-time BBC presenter Sonia Deol as she rediscovers her sikh background. The BBC blurb tells us:

"Just over 25 years ago, the storming of The Golden Temple, the most sacred of Sikh shrines, by the Indian Army led to protests around the world. Sonia Deol embarks on a personal journey to unravel the events of 1984, an iconic year for Sikhs. It culminated in thousands of deaths including the assassination of the Prime Minister, Mrs Indira Gandhi. The bloody aftermath that followed so shocks Sonia that she is forced to reappraise the depth of her commitment to her faith." You can read the rest here.

The film starts its narrative from 1984 which gives the Sikhs a sense of victimhood because of the murderous anti- Sikh riots that we all condemn.
But most Sikhs living abroad are not told of the terrifying phase from 1978-1984, when murdering gangs of Sikh separatists were on the rampage in Punjab, often targetting hindus, in some instances ordering them off buses and gunning them down. Many were under the patronage of Bhindranwale. The Sikhs, particularly those living abroad, are ignorant or are in denial of these events. The most ridiculous statements I have heard is that those Sikh terrorists were actually govt agents.
I lived in Delhi till 1993 and some of my closest friends were Sikhs so I can claim a fairly close hand knowledge of events on the ground. I was also a doctor who treated numerous Sikh victims during the riots, as well as some Sikh terrorists later, who were some of the most dangerous and brainwashed individuals I ever had the misfortune to meet.

Bhindranwale started a vicious war against India and the Hindus, and when Punjab was on the verge of vivisection and another bloody partition, the Indian govt and Army moved in. Yes, easy to criticise the botched action that followed, but let me emphasise- the temple was not desecrated by the Army moving in, it was desecrated by Bhindranwale and his gang who moved in with rockets and heavy armaments.
Punjab bled, India bled, it is time to move on.

I have to agree that I cannot understand the idolisation of Bhindranwale by some sikhs. He should not have been hoarding arms in a place so holy to Sikhs. The actions of some of the separatists were appalling too, and completely contrary,'true sikhs' would say, to their faith.

Equally the Indian govt (who actually, by many accounts, plucked Bhinranwale out and set him up as a leader against the Akali Dal-Janata party) could no longer control their own Frankenstein and went in very heavy handedly.

It was a terrible time in north India, with wrong having been done on both sides. The BBC documentary, which has provoked quite a reaction amongst sikhs, was one particular point of view framed as a 'personal journey'. It may be time to move on but I have to say that I have a lot of sympathy with those who are campaigning for an enquiry into what actually happened during 1984.