Little Mosque on the Prairie but not in the UK 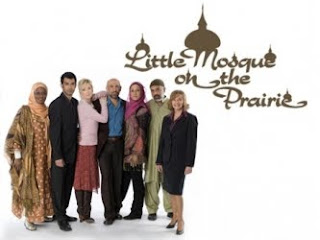 How is it that I've only recently tripped across the existence of this series on Canadian television when it touches on so many of the social and cultural issues of today? Little Mosque on the Prairie is a sit-com on CBC television about a muslim community in a small prarie town in the fictional town of Mercy, Saskatchewan.

Little Mosque depicts interactions between Mercy's muslim and non-muslim people but also has storylines set within the communities - so it is able to cover themes of multicultural living, small town folk, fish-out-of-water angles, liberal vs devout muslims and it has plenty of terrorism and jihad references. Despite the particular muslim angle, I think the programme has a universal appeal. I can't think of anything like this on British television despite the UK size of, and current interest in, muslim society.

Incredibly, the comedy drama, which began in 2007, is in its fourth series in Canada and has had record ratings. So why hasn't the series reached the UK despite going abroad to other countries? I wonder if the answer lies in British TV becoming too risk-averse to feature such material? That is certainly the view of Jon Plowman, a former head of BBC comedy. Of Little Mosque on the Prairie he says, "I don't think anybody would write that now in Britain because they'd worry that the BBC, or indeed any broadcaster, wouldn't make it," he adds.You'll have to watch the show to see what he means - here's a link to the very first episode.

Email ThisBlogThis!Share to TwitterShare to FacebookShare to Pinterest
Labels: British-Asian, Sikh/Hindu/Muslim, what's on