More snow, another leadership challenge and an ex--bishop speaks 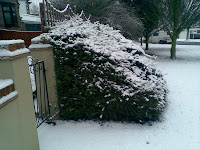 Oh my it's all happening today. Once again south-east London is under snow. Eltham pic to the right here (before it really came down some more). Southeastern trains have caused much outrage with their 'reduced timetable'. It took my husband two hours to get to London Bridge Station. I didn't try and worked from home - I can't afford to take two unexpected hours getting anywhere when I absolutely have to be here on the dot to pick up children from school.

During the afternoon news trickled through of the incredible Hoon and Hewitt attack on the Labour leadership - what were they thinking of? Mandelson was very cool though on Newsnight I thought.

Then Lord Carey, the former Archbishop of Canterbury, decided to pipe up and talk about the want of Christian values amongst future immigrants. Samira Shackle does a good job of elegantly questioning that one.

Let's hope tomorrow is quieter and we can all get in to work.
Posted by Raven Raven at 23:56