Happy new year to everyone.

I've enjoyed being cloistered away for the last week or so with my family and lots of Christmas kitsch - from the latter, there was no escape, you've just got to give in to it, really.

We emerged to celebrate new year's eve at the site where the Millenium symbolically began for the UK ten years ago  - yes, the dreaded Millenenium Dome, or the O2 as it is now known, in Greenwich, south-east London (well, it was bitter, grey and drizzly and there's little else to do indoors with two little young ones, and so we worshipped at this plastic neon palace).

Unfortunately, the film chosen at the O2's Vue cinema to continue the feel-good Christmas atmosphere turned out to be a little darker than the jollier, slap-stick trailers had led us to believe. Disney's A Christmas Carol was undoubtedly a technical and visual triumph but rather too dark and wordy for this occasion. For once, Disney had dished up a film faithful to the orginal novel rather than the usual frothy 'family fun' version required. The Huffington Post's review gets it just right. The children clung closely to us. Ho hum.  After a spot of lunch we visited the O2's indoor 'German market' and 'Christmas Fair' which cheered the children up - bumper cars and helter-skelters tend to do that. 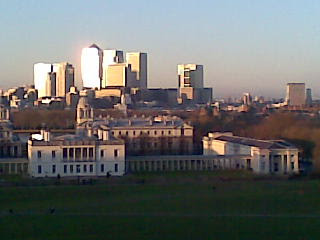 On New Year's Day itself, a sunny cheery day, we set off, as has become the family tradition, for our walk around Greenwich Park. Happily we were joined by my friend L, visiting from New Zealand. The park looked beautiful and was the perfect place to be on the first hope-filled day of the new year. This photo is a view from the highest point looking northwards, with the National Maritime Museum in the foreground, the river Thames behind it, and beyond that glistening in the sun the Canary Wharf development. There were lots of warmly-wrapped people about taking in the views and the fresh crisp air. 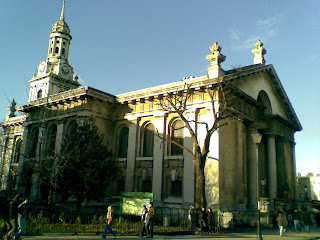 We ambled down the steep pathway to central Greenwich and to a warming lunch at the Cafe Rouge next to the Ibis Hotel. St Alfege's Church, on Greenwich Church Street, looked stunning - when I see it I always think of my parents-in-law getting married here many decades ago on such a historical site where a church has stood since 1012. 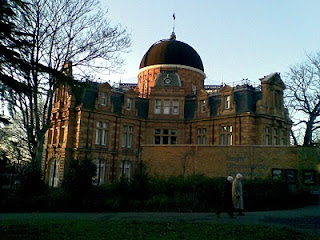 A walk back to the car parked at the top of Greewich Park took us past the Royal Observatory (right) as the sun set to the west.

It had been a good day. Let's hope the coming year will be just as good.