News has been bubbling about a debut film by a young female director which is set in Birmingham, UK. Land Gold Women is about a so-called 'honour' killing in a British-Asian setting.

Writer and director Avantika Hari, still only in her twenties, wanted to make a film which explored exactly why a relative would murder one of their own female relatives. But this is not a film about an uneducated and unassimilated family - the father concerned is a university professor. The film has been doing the festival circuit - in December 2009 it won the Foreign Correspondent Association’s Purple Orchid Award for ‘Best Film’ and ‘Best Script/Screenplay’ at the Asian Festival of First Films in Singapore. (picture above courtesy Rewired PR)

Although produced by Bollywood's Vivek Agrawal, it's a small budget 'indie' film, in English and Urdu, shot in and around Birmingham. Writer/Director Avantika Hari worked closely with the Ashram Housing Association, an organisation which deals many cases of forced marriage every year. The cast are mostly British-Asian actors with Narinder Samra in the lead female role - you can hear her and others interviewed in this BBC clip. (Samra and the male lead in picture below). 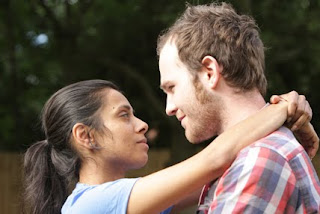 The Land Gold and Women in the film's title refer to the elements in which 'honour' or 'izzat' are typically invested in such patriachal societies where these horrible events occur. It sounds to me like an especially timely film given the verdict last month on the horrifying case of the murder of Tulay Goren, a young Kurdish woman in the UK murdered by her own father for falling love with the wrong type of man as far as the family's men were concerned - the BBC reports on the case here.

Although such murders are thankfully rare, most women from such societies, including let's be honest many British-Asian women will know all about how their behaviour, dress and views are seen as reflecting on their family, to whatever degree. It's an element of Indian society that frankly used to cause me a lot of frustration - I felt it clipped the wings of so many young women while their brothers roamed free. So the film should be interesting...

Unfortunately I haven't heard about a UK distribution - the film had its (presumably one-off) UK premiere in February 2009 at Cineworld in Birmingham. More information here.
Posted by Raven Raven at 20:25

sounds very interesting. hope there will at least be a dvd release.