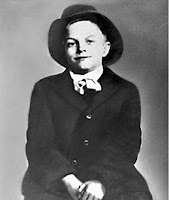 Little ol' Eltham was mentioned in TIME magazine this week. An article about the opening on 13 October of the Bob Hope Memorial Library, by New York's Ellis Island Immigration Museum, refers to one of Eltham's most famous sons, the comedian Bob Hope. The article goes on to describe how this 'immigrant', who died in 2003, made his way to the USA from Eltham, in 1907:


"... He was born Leslie Townes Hope in Eltham, England, and sailed with his family to New York City when he was 4. They traveled in steerage on the S.S. Philadelphia, his mother dressing Les and his five brothers in three layers of underwear, socks and shirts — so they would have more to wear and she would have less to carry. The family settled in Cleveland, where Les made money selling newspapers and giving dance lessons before breaking into vaudeville (and changing his name to Bob), then moving on to Broadway, radio, motion pictures, television, Academy Award–show hosting — pushing his way to the top of each of those endeavors, the most broadly successful entertainer of the 20th century...."  Read the rest here.

He was a controversial figure for some, on the Vietnam war, but also for feminists for his comments at the 1970 Miss World contest ("I’m very happy to be here at this cattle market tonight") which was famously 'flour-bagged' and disrupted. Still, he is part of Eltham history and there is even a flourishing theatre dedicated to him. Originally formed in 1943, the 'Little Eltham' Theatre was renamed the 'Bob Hope Theatre' much later after Bob Hope saved them from certain financial extinction - he even visited the theatre in 1982.

Photo above, 'Bob Hope as a boy in Eltham, England' (courtesy of TIME and AP)
Posted by Raven Raven at 08:02