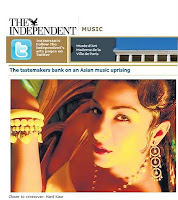 There's a bit of a ding-dong going on about an Independent article. The article by Ian Burrell in the Indy last Friday starts:

"The tastemakers bank on an Asian music uprising

British record labels have traditionally lumped all South Asian-inspired pop into a one-size-fits-all category. But now, says Ian Burrell, that could be about to change
Seven years ago, after a night out with Jay Sean, Rishi Rich and Juggy D culminated in that trio performing to a heaving and euphoric crowd at Ministry of Sound in London, I was convinced things were finally about to change for Britain's Asian music artists.

And, indeed, much has happened since. Jay Sean, then primarily a rapper, has gone on to top the US Billboard charts as an R&B singer. But he achieved that extraordinary success only after splitting from his British record company, starting up his own Jayded label, and then being signed by the American outfit Cash Money Records. Meanwhile, BBC Asian Network, which in 2003 was a year-old adventure on national digital radio, has been shut down....."  Read the rest here.


"BBC Asian Network may not be as it is now, it is likely to be broken down into regional stations, but it has certainly not 'Shut Down'".

A more serious gripe is the choice of artists features in the article, while others think has the website Desihits is not quite as prolific as the Indy prominence to to might suggest.
I think it's good to see a positive and thoughtful piece about British-Asian in the mainstream media, albeit a bit of a puff piece.
Posted by Raven Raven at 09:00