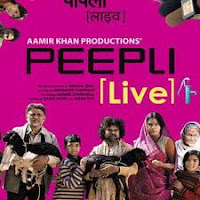 A film purporting to be "Bollywood meets arthouse" and an "anti-Slumdog Millionaire" has recently been chosen as India's entry to the Academy Awards in the Best Foreign Language film category.
Peepli [Live] is a social satire with an unstarry cast yet it opened in August to rave reviews. The film is produced by well-known actor, and latterly producer, Aamir Khan and directed by Anusha Rizvi. It differs from the usual Bollywood fare because rather than romance and melodrama, it explores the topic of "farmer suicides" and the subsequent media and political response.
The Times of India summaries the plot:

"Enter Peepli, a small village in the hinterland where a farmer duo, Natha (Omkar Das Manikpuri) and Budhia (Raghuvir Yadav) are struggling to hold on to their land. Threatened by extreme poverty, they fall upon a novel plan. Natha decides to commit suicide to avail of the one lakh [rupees] compensation package doled out by the government. But before he can do that, the news spreads like wildfire.

The unknown hamlet soon becomes the favourite hunting ground for the voyeuristic news channels, hungry for TRPs, unscrupulous politicians, eyeing their vote banks, fumbling bureaucrats, foxed and clueless about the strange turn of events...Can the farmer's family hope for succour? Is India equipped to handle its swelling population of forgotten and marginalised citizenry? Does Natha survive? Good questions.... "

People have been raving about the film. It certainly sounds intriguing on many levels. A good counterbalance to the glitz, money and controversy around the current Commonwealth Games in Delhi. The film opened in the UK on 24 September. You can check here to see where it's showing.
Some reviews and the trailer (in English):
- a Guardian review
- Reuters India article
- Spiked article, by Felix Holmgren
Posted by Raven Raven at 11:50