Greenwich on film: The Cost of Love

A quick mention of a film reviewed over at Greenwich.co.uk: 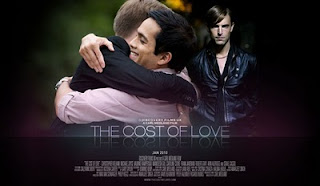 "The Cost of Love (cert. 18) is a new feature film that was filmed almost exclusively in Greenwich and features a very local cast and crew. ... Greenwich based male prostitute Dale (Christopher Kelham) has all sorts of clients. Dale sees them all, from voyeuristic guys into school uniforms, to an older gentleman into scrubbing the bathroom floor for ‘Sir’ (stylish Greenwich guesthouse owner Robert Gray of ‘The Hotel Inspector’ fame).

Dale loves his job, proclaiming: “I like sex, and lots of it”, however you question this as sometimes he delves deep into his imagination, suggesting that he might not love his job so much after all. Aside from this he also has a normal life as best friend and confidante to Raj (Valmike Rampersad). Raj is confused about his up and coming marriage to ‘boring’ Veena (Mandeesh Gill), shown in some beautiful sun-drenched riverside scenes.

It is quite clear that perfectionist cinematographer Amarjeet Singh has spent hours working on this fine film to make it look the way it does." Read the rest...

The film was shown as part of the East End Film Festival at the Genesis Cinema and details of further screenings can be found here. The film sounds interesting for its locations, the Asian angle and the gay sub-cultures it features. What with the recent Eastenders storyline (the Syed, Preeya and Christian triangle) and the forthcoming Indian 'gay film' it seems that the taboo combination of being both Asian and gay is at least beginning to be tackled.
Posted by Raven Raven at 23:01