Who are the UK's Asian women election candiates? 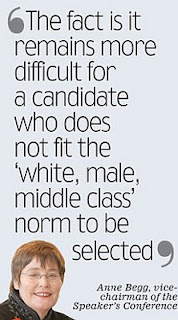 No British Asian woman has yet been elected as Member of Parliament. Yet, according to the BBC, a record 22 Asian women are running to become Labour, Liberal Democrat and Conservative MPs in England and Scotland.

We also learn that the "first Asian male MP was elected in 1892, when Dadabhai Naoroji, an Indian, took the seat of Finsbury, central London, for the Liberals.Almost 120 years later nine Asian male MPs have been elected, but still no Asian women."  I must admit that it's always seemed incredible to me that an Indian, well any 'brown person', could have got elected as an MP in Victorian England - there must be an interesting story behind that one, but for another time...

For now, here's the list of British-Asian women candidates - I'll update the list after the election results have been announced - should be interesting:

(Image above from this article at Daily Mail online; typically the headline in that piece is at odds with the substance - nothing has actually been implemented!)
I'm not in favour of imposing shortlists and frankly there is no reason for me necessarily to have more in common with an average Asian candidate than with an average non-Asian candidiate but am quite happy, for a range of reasons, when under-represented groups do come through as candidates.
I'll try putting in more info and links to the names above as and when (and if!) I get the time to read up on them.

[UPDATE: if you want to see what happened to each of these candidiates on election day, click here]