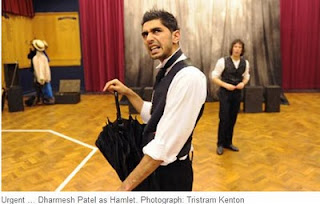 
"Asian Voices: Dharmesh Patel. The first British-Asian Hamlet talks to Suman Bhuchar about making his Shakespearean debut in the RSC's 70-minute young people's version of the play, which is touring Britain and will arrive at the Swan Theatre, Stratford-upon-Avon, in February. Recorded at the Roundhouse, where he is also playing in the RSC's The Comedy of Errors and As You Like It."

In the interview he admits, "The last Hamlet was played by David Tennant so it's a lot of pressure...". One piece in The Guardian said "Dharmesh Patel's Hamlet is lean and expressive, believably full of angst and fantastically choreographed in the fight scenes." Following their recent tour of London schools as the "Young People's Shakespeare", Patel's Hamlet will be at the Courtyard, Stratford-upon-Avon from 1 May. Box office: 0844 800 1110.


"MEERA SYAL The actor, writer and comedian talks to Suman Bhuchar about her role in Willy Russell's 1986 classic Shirley Valentine (Trafalgar Studios), her film and writing career, and her advice to aspiring actors. Recorded in her dressing room, Trafalgar Studios" (October 2010)

though her run as Shirley has now finished I think.
Posted by Raven Raven at 09:00

Email ThisBlogThis!Share to TwitterShare to FacebookShare to Pinterest
Labels: British-Asian, theatre, what's on