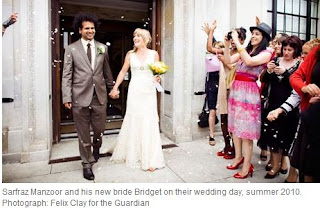 This British story of love, "inter-racial", "cross-religion" marriage, class difference, marrying out etc. managed to pass me by this autumn...

Sarfraz Manzoor, Guardian and Observer writer and increasingly 'commentator' on TV and radio, writes quite movingly, and surprising frankly, about his own personal life.

Last September in the Guardian, "My mother and siblings were angry that I had fallen in love with a non-Muslim white woman" but would they attend the wedding?

Manzoor updated the story last December when I caught it, in 'what happened next...The writer's marriage in the summer to a white non-Muslim split his family"

In the post-article comments he gets it from all angles - 'it's wonderfully moving',  he shouldn't be diluting his culture, he's not diluting it enough, he's racist towards white women, he's sexist towards Muslim women, he's 'marrying out' up the ethnic ladder.  Personally I found it a fascinating story - he may or may not be a bit or all of these things, but the story is true and seems honest.

In these days of mixed societies the story will have some resonance for many readers. As a brown Brit (nominally Sikh) married to a white man (nominally Christian) I can empathise with the situation in some respects. I wish them the best.
Posted by Raven Raven at 18:05