Catford prefabs to be demolished 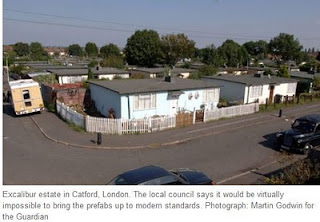 "The UK's largest surviving estate of postwar prefab houses, described by conservationists as a unique slice of 20th-century social history, is set to be bulldozed and replaced by modern housing.
Only six of the 187 compact bungalows, erected from factory-built panels by German and Italian prisoners of war in 1945 and 1946, will be saved, after they received Grade-II listing last year. The remainder of the Excalibur estate in Catford, south-east London, will be demolished, along with its tin-roofed prefab church, St Mark's, believed to be one of a kind.

Campaigners say the planned redevelopment, formally approved by Lewisham council in September, will destroy a key piece of history from the aftermath of the second world war. The estate is the biggest surviving remnant of an ambitious project which saw 160,000 prefabs hurriedly erected during an acute housing shortage...."

It's a shame in a way but on the other hand hopefully something usable can be built in their place - people have got to live and work somewhere.

My children's primary school in Eltham also has some listed prefabs in their playground which I believe they are not allowed to demolish (even if they had the money) - the kids have their early morning band practice in them (including my daughter on clarinet, ahem) - what a sound emanates from them!

UPDATE: this situation seems to have caught the national eye even more. A Comment is Free piece by Simon Jenkins here argues very persuasively in favour of saving the estate despite Catford lacking 'pzazz', while the BBC today (15/1/11) features a gallery of wonderfully evocative photographs, giving some touching personal narrative to this story.

The New Shopper reported on this story as early as last August saying that "More than 56 per cent (114 votes) were in favour of the estate's regeneration while 89 people were against the proposals and 21 did not vote at all. "
Posted by Raven Raven at 09:33

dont we have a right to warm damp free home. if people want to save them then why dont they leave in them when it is in the winter and we are putting 50pound a week on the gas! my girls had icelies inside there bedroom window! it isnt right to live like this! so please when you say that shouldnt knock them down live in them for 3months in the winter go to the toilet and you are cold!!! we had the vote and 56% of as voted yes!!!

You have every right to want that. I hope you get to live somewhere where you and your family can be happy.

The decision has been made to get rid of the prefabs and I certainly wouldn't want to argue that people should be made to live there for the sake of protecting history.