Egypt speaks, Mubarak in de-nile and Twitter works (for some) 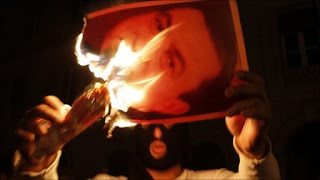 I've been watching the serious events in North Africa over the last week, first Tunisia and now Egypt. Will this turn out to be the Arab world's 'Berlin Wall' or is it just some restlessness? The protesters want economic and social reform. The outside watches tensely - happy to support western-style 'liberal democracy' but fearful of what the current regime might be replaced by and not wanting another 'Palestinian result'.

It's fascinating that we could be watching history in the making. The events are moving fast - earlier tonight the Egyptian President Mubarak finally made a statement ('ok, I'll sack the govt if you insist but I'm not going, and I'm definitely going to carry on dying my hair jet-black'), and just now President Obama ('there must be reforms, but we still like Egypt very much though we could cut off the military aid we give you, and oh, this is a 'moment full of promise'). Many protesters are currently breaking the night-time curfew imposed.  Good to see a female Egyptian commentator on Newsnight just now (Mona somebody, from the USA) - to look at the thousands on Cairo's streets you'd think no women lived there...

Again, as a relative newbie to Twitter, I found that the rapidly-developing Egyptian situation was a  good instance of where Twitter really worked for me, feeding me the latest developments from a range of sources. Sadly of course this wasn't available to Egyptians where the internet was 'shut down' during (their) Friday night - interesting article here about the mechanics and philosophy of that. There was much Twitter praise for live coverage by the Al Jazeera English TV channel - part of that must be that it was easily (and freely) accessible on the net.

Aside from the serious stuff, I enjoyed these more light-hearted tweets:

Is it appropriate to note that Mubarak seems to be in de-nile?
Psythor James O'Malley

by darryl1974
I bet in the middle of the demonstrations in Cairo, there's still a beardy SWP bloke selling the Socialist Worker, like all protests.
davidschneider David Schneider

by greenwichcouk
Amazing scenes from Egypt. I just hope Prince Charles' driver doesn't decide the best route to the theatre is via Cairo.
and finally on a more serious note, if you want to make your feelings known tomorrow in London about Egypt: