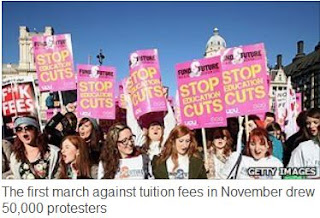 Got to acknowledge the big marches due today in London and Manchester:

From the Guardian: "Thousands of students, union activists and tax avoidance protesters are expected to take to the streets across the UK this weekend in anti-cuts demonstrations."

There will be "simultaneous protests...in London and Manchester against the rise in tuition fees and the abolition of the Education Maintenance Allowance.

"Organisers of [the] demonstrations, which are supported by several unions including Unite, the GMB and the University and College Union, say they expect several thousand people to attend in both Manchester and Leeds... The march in London will start at midday and is due to finish with a rally at Millbank...".  (It's a shame though that that Guardian piece had to harp on about the negativity surrounding the November marches and choose the 'wrecked' Millbank photo with which to illustrate it).

Good luck to them today for an effective and peaceful protest. I'll be grateful to them for one, if they are successful in conveying something to this government about the strength of feeling of ordinary people about the damage that will be caused to the infrastructure of our public services. I know from first hand how the funding proposals for higher education will totally change the university landscape, and not for the better. The cuts are too much, too soon, and smack of another agenda.

And watch out tomorrow for the various tax avoidance campaigns (many in SE London areas), linked to UK Uncut, which are hoping to repeat the protests that shut Vodafone and Topshop branches last year.  The Guardian continues: "...at least 30 different tax avoidance demonstrations are planned by UK Uncut. Using the Twitter hashtag #ukuncut, the fast-expanding group has become a rallying point for opponents of the government's cuts.

A spokeswomen for the group, Danny Wright, said Sunday's action aimed to "up the ante". She said: "We are trying ... to show how systematic this injustice is. It is not just these companies that are the problem, it is the system that allows this to continue. We want to show this government that despite what they keep telling us we are not all in this together, these cuts are not fair and there is another way."
Posted by Raven Raven at 10:34