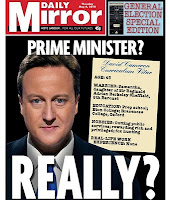 So the day has finally arrived. The closest UK election for a generation. Liberal Conspiracy is quoting YouGov President Peter Kellner’s prediction of the outcome, as follows:

That is still not believed to be enough for Cameron to form a majority government. 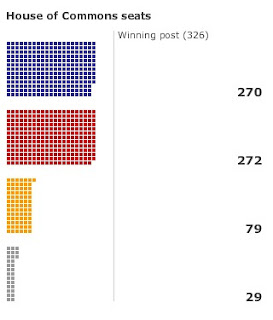 The Harris poll, as reported by the BBC on 5 May, is more optimistic about Labour's chances. If people voted like this (to the left) at the general election there would be a hung parliament. Labour would be the largest party, but would be short of a majority by 54 seats.

Let's see what happens. Roll on the results.  I will try to stay up as late as possible tonight, though work and kiddy-duties will mean I might have to give in to sleep.
Posted by Raven Raven at 08:25