If a picture paints a thousand words 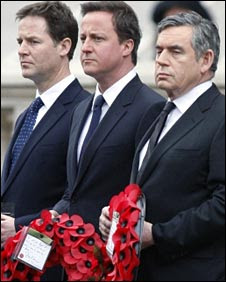 What a story, what drama and emotion this photograph captures from today's service marking VE Day and 65 years since the end of World War II in Europe.

The three leaders of the three main political parties were thrown together side-by-side today as they attended this event this morning.

Yet, following the hung parliament result (captured below for posterity, or as long as this blog lasts...) the three are also at the same time deeply involved in trying to put together a coalition government while keeping their own troops happy.

Will it be Prime Minister Cameron, leading an-all Tory cabinet, with some concessions to Lib-Dem policies? Will this be one of Gordon's last public events in some sort of PM-role? Time will tell. 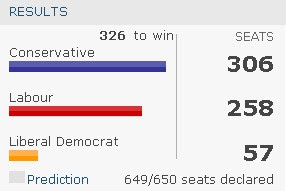