The weekend after: Eltham was 'low hanging fruit'

I spotted some analytical mentions of the Eltham election result in the press this weekend:

Firstly, in a Telegraph piece, co-incidently by  locally-residing journalist Andrew Gilligan, we have Boris Johnson speculating that it "would have seemed impossible that the Tories would not pluck such low-hanging fruit as the marginals of Eltham, Hammersmith, and Westminster North." Gilligan goes on to ask "Why did Dave not win the C2s of Eltham?" (presumably 'Dave' Cameron rather than 'Dave' Gold...).

The piece goes on: “A bloody good question, a question we need to look at,” says Mr Johnson. “We need to get across a strong aspirational message about helping people who work hard, not being endless slaves to political correctness and not taking their money ...People don’t like being made to feel that their instincts and normal patterns of thought are in some way beyond the pale.”

Oh dear. You know what's coming. Gilligan picks up on that writing "That feels like code for a stronger pitch on immigration. The Tory campaign was a little restrained, thinks the mayor."

Well, as has been pointed out here and here some Tory candidates did decide to pander to fears and prejudices - oh sorry, I mean not to be "slaves to political correctness". 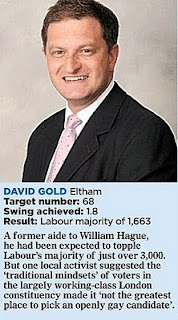 Secondly, the Mail looks at the reasons behind the dashed hopes of the "Tatler Tory A-listers who failed to make it to Westminster".


"...those candidates in the Tories’ ‘Rainbow 1st Eleven’, the official list of candidates happy to be identified as gay, managed an average swing of just 1.2 per cent. Six of the 11 won seats. The losses included two target seats which Tory high command had pencilled in as easy wins. In Eltham, David Gold, a former aide to William Hague, had been expected to topple Labour’s Clive Efford, defending a majority of less than 3,000. However, Gold only managed a swing of 1.8 per cent, allowing Efford to hold on."

The accompanying picture and insert in the Mail piece (shown here) suggests there might have been a homophobic views at work. That would of course have been reprehensible although I have to say that I didn't come across any signs of this (although I accept they are not always apparent).

And finally, another offering which gives one further assessment of why Efford got back in, and why Gold didn't... A comment on a blog, the 'Liberal Democrat Voice':

"So, in Eltham, Labour held in 2005 but with a slim majority, I saw what an Ashcroft campaign looked like. Slick, but boring. Very samey. Essentially the same leaflet delivered 5-6 times. The decent local Tory councillor who stood last time shunted aside for a vapid Cameron-lookalike and soundalike. This did not work against a sitting Labour MP who does the local man stuff very well, and has enough of a record of not being a New Labour clone to gain much more respect than I’d give the outgoing Labour MP for Lewisham East, as an example. So, Eltham saw one of the lowest swings to the Conservatives in England, and a somewhat surprised Clive Efford re-elected."

The 'decent local Tory' is of course Spencer Drury (who has just failed to win against Nick Raynsford for the Greenwich and Woolwich constituency but who did manage to secure again a place on Greenwich Council as Tory Councillor for the Eltham North ward). Drury stood against Efford in 2005 and polled a decent 12,105 votes against Efford's 15,381.

So that's my Eltham digest for the moment - I'm off now (and, harking back to the end of my previous post - my daughter is now a fully-invested Cub Scout, and has sworn to serve Queen and God, or something like that...don't start, it's late)
Posted by Raven Raven at 00:27