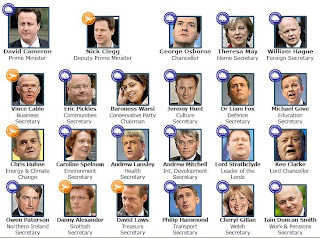 I'm a bit exhausted by the events and emotions of the last couple of weeks. It has been a fascinating (and yes, an ultimately gut-wrenching) time. Lots to say, but little time, so for now:

Last Wednesday was unbelievable - news of the Cabinet posts trickling out through the morning and then the surreal 'Dave and Nick' show. Are Cameron and Clegg great pragmatists who will sacrifice party lines for the country, or will they do anything to cling on to power, going completely against the vitriol they were spouting about each other only a few days ago?

Then last Thursday morning the LibDem Voice blog orginator Rob Fenwick, resigned his leadership of the Lib Dem party, worth quoting at length:


"Two privately educated white male millionaires stepped through the door of Downing Street this morning to usher in an era of new politics – if that’s new politics, I preferred the old style. There will be many who say that policies are all that are relevant, and not the privileged life of the leaders outside of politics. I strongly believe there are millions in this country who don’t accept that, and who are more alienated from their political masters today than they were a week ago.
I don’t accept that the Conservative party has changed – when Margaret Thatcher lead this country the Conservatives were  guided by a  political philosophy which revered markets, was ideologically committed to cutting state support for the vulnerable, and who passed many of our public services in to the hands of multinational corporate interests. When I look at the Conservative benches I see many of the triumphant faces from that era still resting on green leather."

Since that time we've had all sorts of analysis, including:
-- just how are the mechanics of a coaltion going to work?
-- is the Cabinet too 'Male, pale and stale'? Only 4 women out of 23, forgodsakes!
-- How on earth can Theresa May be Equalities minister with that record? A petition has already been started to have her removed in that role
-- just how many Lib Dems are actually defecting to Labour in disgust?
-- Fixed term parliaments and the 55% rule - stability or 'stitch-up?
-- has Nick Clegg got a real job or has Cameron just fobbed him off with an office with a telephone line that's not plumbed into anything? (thank you BBC R4)

However, despite the first three days of frenzy, I sense a calming down. People are seeming to mind less, I think. Perhaps the fever-pitch can't be maintained and people need to get on with life for a bit. Also, now that we've had some policy diktats from the coalition, certainly the public sector is trying to get its head around what those policies will mean. Now that £6billion worth of cuts are needed, each university is busy doing the maths. More on that another time.

And now the Labour Party leadership. It really feels much, much too soon. Especially for the candidates appearing to be, in effect. on their campaigns trails. Enough already. At least for the moment.

[*I just can't stop myself titling posts with song lyrics - I know it's unsophisticated and juvenile but there you have it. I shall seek help.]
Posted by Raven Raven at 23:22

Yes, head in a whirl and all that jazz!
We have to see what the future holds for these two - maybe the tory grandplan is to convince libdems to defect to the tory side rather than labour as we would expect.
BBC2 had an interesting documentary on boy george's early life which included snippets from Maggie when she went into power. I swear it was David Cameron in a dress the speech was almost identical.
As for labour, Mr Plummy Mummy and I have had lots of fun writing skits about the Millibands around the Sunday lunch table. Well if you are going to run, so am I. And an alcohol soaked mother at the head saying the two are useless and she's going to vote for the other guy (I have no idea of the lady drinks but it fits in with our skit much better). While there is no reason brothers shouldn't run for the same office, it does make one think of the general state of the labour party where we have shopfloor brothers now battling against eachother. Sigh.

P.S. scrapping the London runways and ID cards may actually have me voting tory next time. Now if they would only get rid of the pesky olympics :)

I agree, it is a bit curious about both the Millibands running. Though I doubt if either of them has been part of a shopfloor...

The third runway and ID cards moves were shrewd early calls for this govt. Let's see what else they do. But remember next time the Tories might not have the Lib-Dems to moderate them.

On the olympics, I'm pretty agnostic but would be more in favour if only I could be more certain that some lasting regeneration and benefit to the local communities would happen.