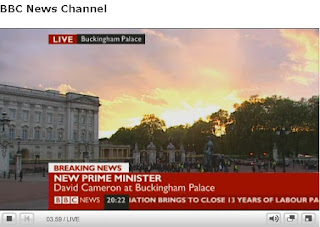 Gordon Brown resigned this evening as PM and as Leader of the Labour Party.

His resignation ends 13 years of Labour government. The Lib Dem-Labour talks failed and there will now be government led by the Conservatives, supported by in "proper and full" coalition with the Liberal Democrats. More details to emerge about what that means...

Harriet Harman is to be acting Leader until a new leader of the party is elected at the September conference.

David Cameron has just left Buckingham Palace having been asked by the Queen to be the next PM. His staff are already waiting outside No 10, for goddsakes - hopeful happy faces, just like the faces were that day in 1997. It all hardly seems believable. Cameron speaking now; he pays tribute to the former PM. More another time.
Posted by Raven Raven at 20:46