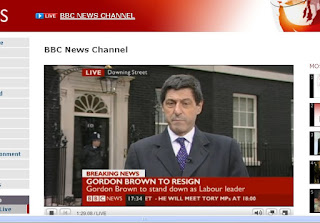 
"Gordon Brown has said he is stepping down as Labour Party leader.
Mr Brown, prime minister since 2007, said he wanted a successor to be in place by the time of the party's conference in September.

Mr Brown announced his intention to quit in a statement in Downing St in which he also said his party was to start formal talks with the Lib Dems.

Wow. Not unexpected, by still, wow.  This will keep us all going for a while yet.

(for now, I must tear myself away and attend the ceremony for my 'Beaver' daughter to graduate to a 'Cub scout'...who knows what will have happened by the time I get back...)
Posted by Raven Raven at 17:52